You are here Home » Recipes 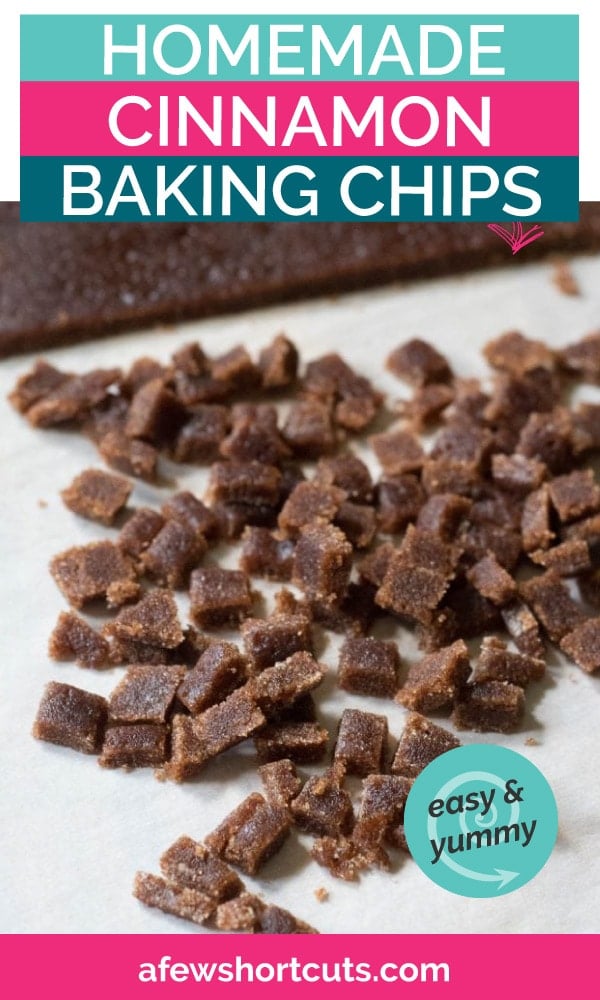 Do you love cinnamon muffins, scones, cookies, and more? You have to try this simple Homemade Cinnamon Baking Chips Recipe. THEY ARE AMAZING!

Do you know when you get one of those snickerdoodle or cinnamon swirl muffins and it has that little pocket of cinnamony goodness inside? That is caused by these Cinnamon Baking Chips....who knew? I certainly didn't. I mean I guess I just took for granted that the cinnamon fairy waved her wand and made my muffin that much more special. This easy Homemade Cinnamon Baking Chips Recipe will have you wanting to bake all of the cinnamon treats.

To make these tasty homemade cinnamon chips you need

You will also need a baking sheet, mixing bowl, parchment paper and an oven.

How to Make Cinnamon Chips

In a medium-sized bowl mix together the ingredients. I used my hands to make sure the mixture was good and incorporated together.

Pat out the cinnamon-sugary batter on a parchment-lined pan and pop in the oven at 200 degrees for about 30 minutes. The side effect is your house will smell like a cinnamon sugar heaven. There are worse things...trust me.

After the disc cools use your hands or a knife to break it into chips. Mix them into muffins, pancakes, cookies, and so much more. We have used them in these Easy Pancake Bites and in the BEST Mini Snickerdoodle Muffins.  YUM!

Not everyone thinks about how hard it is to find gluten free or vegan baking ingredients. These tasty tidbits are both. Another reason I love these Cinnamon Baking Chips!

While these Baking Chips are the best, I encourage you to get creative with other flavors. Try using Pumpkin Pie Spice in place of the cinnamon to make some delicious fall baking chips.

Are they supposed to be hard? These will have a softer texture. They will not be rock hard. That is ok. You want them to kind of "melt" into your baked goods.

Other fats. No vegetable shortening? No problem. You can use palm oil or coconut oil in place of the shortening, even lard.

I use these in so many recipes, especially during the fall and winter months. You can toss them in muffins, cookies, pancakes, and more. Here are a few of my favorites.

Store these in an airtight container in your refrigerator until you are ready to use them. I have kept them for a couple of months successfully, but to be honest, they usually don't last that long.

Make these in bulk and freeze! Make multiple batches of cinnamon chips. Cut them up and spread them in a single layer on a baking sheet and pop them in the freezer. Once the chips are frozen place them in a freezer bag and back in the freezer. Remove and use them in any baked goods as needed.

I have found though that once you realize how good they are in all of your baked goods, they won't be around long.

Oven temps can vary. You can turn your oven up to 225 if you feel like your chips aren't coming together.
Keyword baking
Tried this recipe? Let us know how it was! We love comments!